We thank the Gazzetta del Mezzogiorno (also available online) and the excellent journalist Marina Dimattia for the wonderful article about the work Fronteversismo sun and peace and the international Franciscan project Integral Optimism. 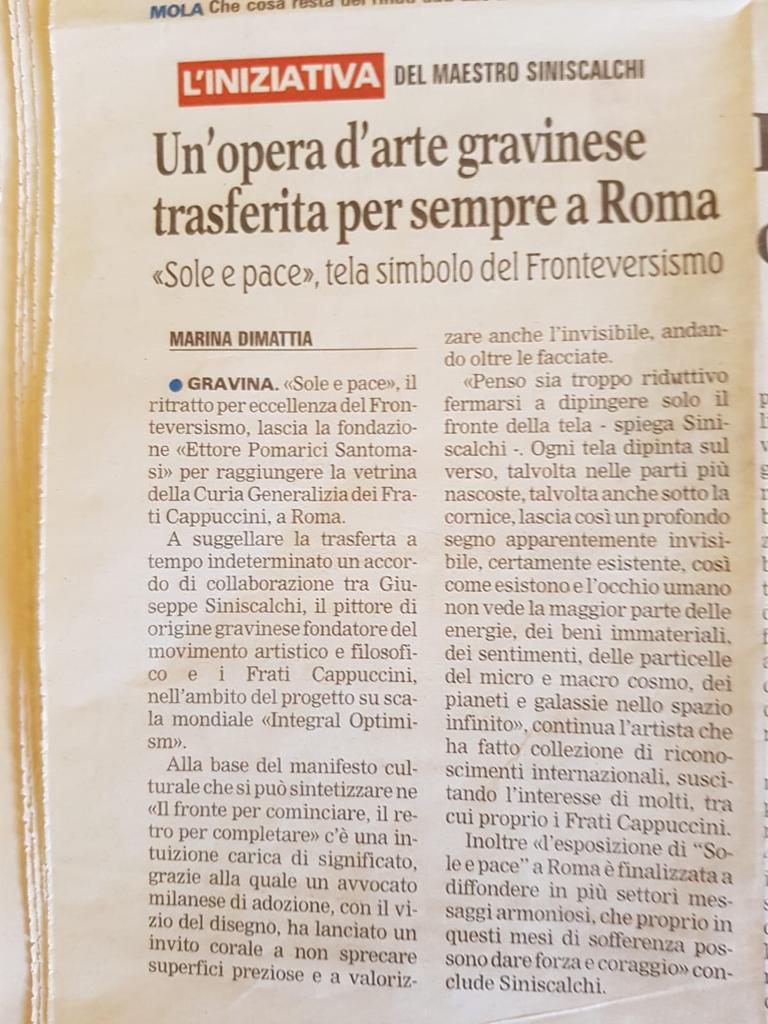 Translation in English of the post
Title :  A work of art from Gravina moved to Rome forever.

Sun and peace, canvas symbol of Fronteversismo.
Sun and peace, the portrait for excellence of the Fronteversismo , leaves the foundation “Ettore Pomarci Santomasi “ , to reach the showcase of the General Curia of the Capuchin Friars in Rome.
A collaboration agreement between Giuseppe Siniscalchi, the painter of Gravina origin, founder of the Art and Philosophical Movement and the Capuchin friars, to seal the trip for an indefinite period, as part of the worldwide project “integral optimism”.
At the base of the cultural Manifesto “ the front for to start, the back to complete ” there is an intuition full of meaning, thanks to which a Milanese lawyer by adoption, with the vice of design, launched a choral invitation to not waste surfaces precious and also to enhance the invisible, going beyond the facades “.
“ I think it is too simplistic to stop and paint only the front of the canvas “ explains Siniscalchi. Each canvas painted on the back , sometimes in the most hidden parts, sometimes even under the frame, thus leaves a profound apparently invisible mark, Certainly existing, as they exist and the human eye does not see most of the energy and intangible assets , of feelings, of particles of the micro and macrocosm, of planets and galaxies in infinite space “, continues the artist who has collected international awards, arousing the interest of many peoples of whom own the Capuchin Friars .
Moreover , “the exposure of sun and peace in Rome is aimed at spreading harmonious messages in several sectors, which in these months of suffering can give strength and courage” , concludes Siniscalchi .