I summarize here my artistic view:

Fronteversismo®, an italian neologism that could be translated with “backandfrontism”, is a term that tries to enclose my new and original way of addressing painting, thinking and cultural life in general in view of a better world of peace.Every canvas has its deepest and most hidden parts, where signs can be left: apparently invisible but surely there. Just like most of the energies, immaterials, feeling and particles in the micro and macrocosm: they exist but are not reached by the human eye.

Think about what makes us what we are. It is only thanks to our “inside” (unseen from the “front”) that we are able to exist, live, feel.  I am sure that also paintings should have a heart and a soul, that are invisible but existent and vital. On the “back” lies the heart and soul of the artist: they give energy to the painting and connect it with eternity.

Giving a value to what is invisible is the contribution of painting to a new course in human thinking, a course characterized by a more reflexive attitude towards the universe, a deeper respect for nature and the limited resources of our planet, sounder interpersonal relationships that more and more, in today’s stressful life, have to stop at the facade, at computer or smartphone screens.

“Fronteversismo” has also the deep meaning of remembering those that are no more, but leave an undeleatable sign in ourself, testifying the boundaries of human life. I also believe that many conflicts arise from the ignorance of man’s smallenss with respect to the universe, generating arrogance and abuse.

In every field, we should go beyond the appearance, in depth, to discover all those values that are neglected in todays routine. This is the way to a greater intercultural integration between persons of different cultures and countries, whose reciprocal knowledge is crucial to the affirmation of peace as an absolute value.

“Fronteversismo” should also be an invitation to avoid wasting precious surfaces that have been obtained employing natural resources, canvas and wood.  However it is not mandatory to have the whole back painted: it could be enough to add a simple sentence, a brush stroke, a little flower, without forgetting that also the void is a crucial part of the cosm, as the zen philosophy teaches us. The work of art must also not be exhibited such that the back is always visible: as invisible particles are seen only through microscope lenses once in a while, so is the back of the painting revealed only when the painting is hanged in an open space or on a transparent support. The fascination of “Fronteversismo” relies in the deep meaningfulness of the back and front relationship, symbol of the equilibrium with the whole universe.

I believe that painting, a form of art that has never lost his appeal, can give its contribution also in these moments of crisis in many fields.

My idea of a front/back painting should induce to think about the importance of all those things that we do not see “en façade” but that exist as energy and part of the micro and macrocosmos. Feeling, for example… The world of scientific research – nanotechnologies among the others – is rich of cases that show the importance of this unseen world for the future. Unfortunately, this seems to have been still not properly vehiculated by medias.

I dream of a new artistc, cultural and philosophical movement to develop this idea and contribute to the creation of a better world. I would call this movement “Fronteversismo”.

Painting only the front of the canvas, as most painters do, is thus reductive and dangerous. A real integration with the cosmos should consider as many things as possible – including energies and immaterial beings – that exist although unseen. That is why I have to paint at least in part the back of the canvas, sometimes also with a simple little flower or seal (for example in “meditation between country and sea”, “space peace”, “moon and peace”, “feelings of peace in spring”, “full-moon night in Joetsu”, “wa-moon dominating Mars”, “wa-moon”, “wa-sun” or “peace in the desert”).

Clearly not every painting requires such a total development of the drawing, since also the void – as the zen philosophy teaches – is very important and space itself is a crucial component of the universe.

I do not care about records and do not claim to have been the first to say such important things. However I embodied this idea in myself since childhood (see for example “the happy jaguar” or “countriside village” or “the numbers” among my school drawings) and would like to be an herald of it today. 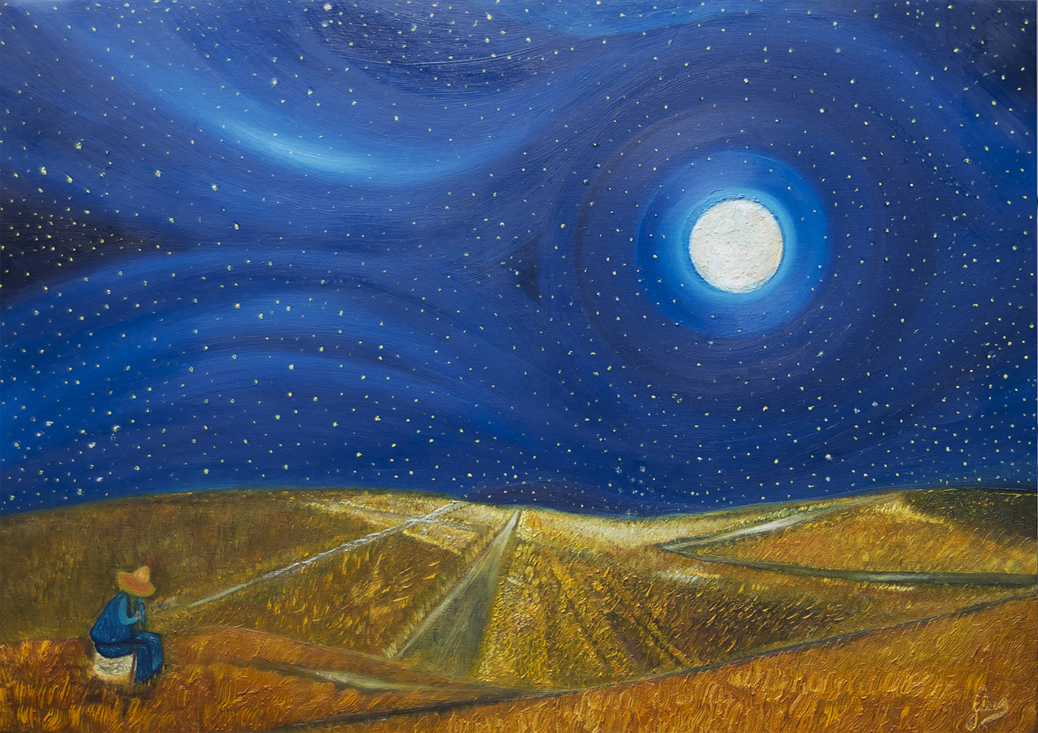 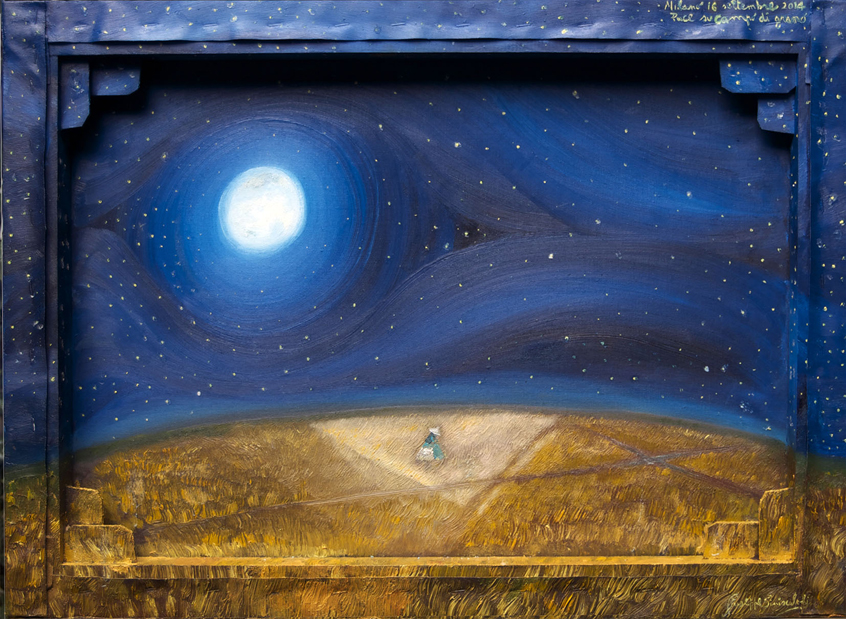 I hereby synthetize my artistic thought in a few points: